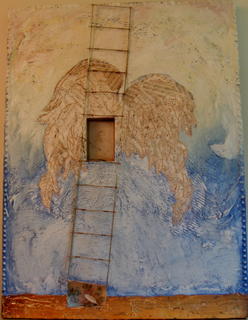 The ultimate analogy for the creative spirit, Jacob and his darned angels. Whether struggling up a heavenly ladder with drooping wings (sometimes we forget why we're here).... or wrestling with our very natures in an attempt to finally be like the rest... but it's no good is it..it ain't gonna happen... otherness is part of the whole kit and
caboodle of creation... so DEAL!!!!!
"Otherness" is one of the great challenges of the soul.....a true character builder....remember how our parents used to say difficult situations would "build character"....well, any opportunity to be the outsider.... l'etrangeur...not of the tribe....and the complexity of sensations that goes along with it will give new and interesting insight into the human condition...and that's why we're here, right, to interpret the human condition. Good ol' Jacob...he didn't win.. but he understood.
Posted by Paris Diaries at 11:43 AM

On the 26th of April, in a darkly dangerous cyber café I tapped out my first message to my friends in T.O......but all is not as it seems....the computor I work on appears to be normal but it won't let me do normal things.....only one letter can be deleted at a time....copy and paste isn't on, and it won't let me check my spelling. Panic rises as I realise how long I'm taking to do simple machinations, dizziness envelopes me.....will I be the first computor casualty of the day?????

Dear Pals,
Well I've been in Paris for just over a week and my gawd it feels good! I have such a feeling of "bien etre" that it scares me and I want to knock on wood at every opportunity. I feel alive!!! And goodness gracious ladies...I exist. The men...let me say that again...THE MEN!!! of Paris are still as gentle and polite and handsome and ATTENTIVE as they have ever been. You feel beautiful just wandering down the street!!! OK, OK... I'll go easy on the exclamation marks. But good golly Miss Molly...I guess I don't look half bad.. at least that's what I see in their eyes. So far I have been out with 2 very nice fellows...one named Alain, don't pronounce the N, I met him on the flight over, he's very lovely, loves Canada and thinks that all Canadians are "fresh air kids", we went to "Louvre Nocturne" how's that for romantique gals, the Mona Lisa by candle light. Then at a dinner party the other evening I met Gilles he wants to go biking this weekend...there's that fresh air again. OOh la la!!!

Everything else is going great guns. The gallery loves my work and I'm already working on some new stuff. And I love my apartment. From one terrace I see the Tour Eiffel and from the other I see L'Invalides. I'm having friends in for lunch on this very same terrace friday and wednesday next so drop by if you're in the neighbourhood.
A bientôt!!!
Posted by Paris Diaries at 12:14 PM

I was talking about watersheds yesterday and thought that this would be an interesting painting to show you while I relate an anecdote that pertains to art and creating.....one of the great mysteries of life. The painting is titled India and is 48"x36".

As I said earlier, I've always been a creative.... I've always lived a rich and fanciful inner life.....and often this inner life was thanks to literature. I was one of those kids that spent their childhoods with their noses in books. So, when I was invited to dine at High Table with the Master of one of the Cambridge colleges about 15 years ago, I was beside myself with anticipation at the delightfully erudite conversations I just knew I was going to have with these fellows.

I was seated at the great man's left hand...an enormous honour indeed ........the guest of honour was on his right......the dinner commenced. It didn't take even my dim-witted self long to note that every time I opened my mouth to murmur some clever little observation the Master regarded me with utter astonishment......a bit as though I were a fish playing the piano. The fact that a Canadian female was able to string more that 3 words together in a grammatically correct order was leaving this Oxbridge intello jaw-droppingly awed. It was only later that a friend observed that being the youngest, tallest and "blondest" of the females in attendance, I had been seated next to the demi-god for decorative purposes only.....as my brit-wit friend pointed out, I was the designated, thinking man's "crumpet" for the evening.....placed there to enrich the fanciful imaginings of the surrounding dons and fellows. "You're just a little colonial for God's sake....you're not expected to have a brain!!!!!" exhaled my friend.

So what has this story to do with creativity and the featured painting?? Well, that evening when I returned to my digs, a little the worse for the famous college port on top of the equally famous college wine....I swore on my French Canadian grandmother's soul that I.....who through out her life had always had at least 3 brit-writ novels by her bed....would not read a single book written by a bloody-brit for as long as I lived in England.....in fact I would only read COLONIAL authors!!!!!

And thus began the richest inner life I could ever have wished for.....Indian authors gave way to India travels which....as every creative knows....gave way to Indian influences in my work. The same can be said of China....the Middle East....Istanbul....I've never stopped. That evening changed my life...my art....my thinking.....my themes..(otherness & the positive effects of culture clash).

I guess the man was...if not a bigot....certainly a blinkered, closed minded old sod....and yet it is he that I thank for ricocheting me into a way of thinking about art that will stay with me the rest of my life. 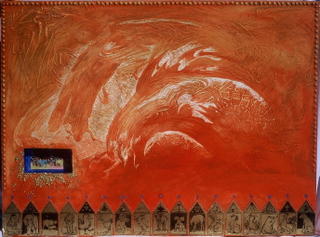 Posted by Paris Diaries at 3:21 PM

Here's another painting....thanks for the requests, it's nice to know you enjoy them. This work is made with built up medium, music transcript, gold leaf, ancient legal documents, oil paint, guauche, and finally, relief sculpture. The whole thing is on a 5'x4' plywood structure that hangs flush to the wall. This painting was a real watershed for me..it was one of those works that I had to fight with and finally, only after much anguish and frustration, did it show me how it wanted to be. I won't say that its final form came to me in a dream, it was actually during a telephone call that I hadn't wanted to answer...... between my running from the studio to pick up the phone and returning to the studio 5 minutes later everything changed....a bit like Athena springing fully formed from the forehead of Zeus or something. 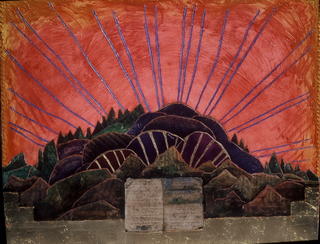 Posted by Paris Diaries at 7:14 PM

Did I Mention I Was An Artist? 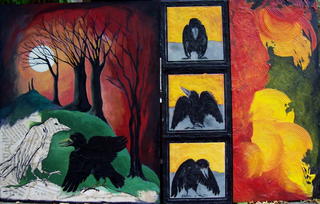 A lot of what I'm going to talk about will revolve around the fact that I am and always have been an artist....since the age of 2 my father used to say. So to make things a little easier for you I will show you my work from time to time..... This particular image is a triptych, 72"x45". It's centre panel is encaustic..an ancient form of painting with wax and resin, the panel on the left is oil paint on a collage of music transcripts and the last panel is built up and distressed medium. The work is called "Lux Aetaerna" quoth the crow'.
Posted by Paris Diaries at 4:16 AM